And Jill Came Tumbling After

Every time I have taken a tumble, there has been a reason and an opportunity to see, to understand and to learn something. A few weeks ago I fell flat on my face in George Street, Sydney. One cracked rib later and after much contemplation and a fair bit of meditation, I discovered what that fall was showing me.

Now I had a choice, to address the issue or ignore it.

We always have the choice.

So what is a fall?

It can be the moment we lose our footing. It may be the time we succumb to exhaustion caused by the stresses and strains of our daily life. It may be the mental anguish of worrying about what happened when… or what might happen if….  A fall can be physical, emotional, mental and spiritual.

The thing is, we all have an inner gage that informs us just before we are about to fall. It will tell us, albeit softly, just before we trip, that something is not in balance within us.  A fall is never a punishment. We never deserve to fall. A fall is a way our soul can grab our attention and help us re-establish harmony and balance. 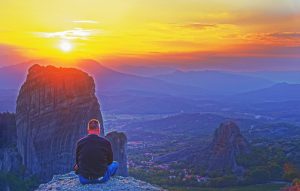 We might be overwhelmed, angry or trying too hard, We might be the kind of person who says yes to whatever is asked of us, or we may want something that satisfies our own our desire but does not take others into account. Sometimes it can simply be that we are ignoring an uncomfortable feeling about a situation in our life.

That feeling of slight discomfort that we all get at one time or another is telling us something is not sitting right. It could be frustration or  guilt or anger. It might show up when we are really trying so hard to be good, and kind and generous when in fact all  we really want to do is turn out the lights and go to bed.

Some of us say yes to almost everyone’s demands. Can you babysit for me tonight? Yes. Would you pick up the laundry for me. Yes.  Can you  organize  dinner, go to the bank, take over for me. Yes. Yes.  Can you organize the next meeting, plan the party, speak at the conference  Yes Yes Yes.

And although there is nothing wrong with saying yes, it is the intent behind the yes that makes all the difference.

Here is a story that happened to me yesterday that illustrates intent very well.

Once a week I do Meals on Wheels. I love it. Two of my people live in an apartment on the 4th floor. I always have a chat about their children and grandchildren and occasionally I bring my dog which is always a treat. Last week, when I re-entered the lift the strangest thing was there. The floor of the lift was covered in cash. Gold and silver coins covered the floor.  I gathered them all up and tried to find  out who they belonged to but there was no one around. Later, I chatted with my son and I thought I would give it to the man who often sits on the ground outside a building in the city. Yes. That’s a great idea. After all the money it not mine, but I started to feel uncomfortable.

Was that the best solution?

I have a friend  who tends to always pay for coffee for her friends. She always does it but recently she complained to me that most of her friends don’t even offer to go halves anymore. She felt angry and used but doesn’t want to look mean.

When we are always paying for others we are actually teaching them to take.

So in order to make the best choice from the purest intention about what to do with the money, I have decided to wait, and to ask the universe to show me. ‘Show me the most harmless and loving way to give these coins away, that is for my highest good and the highest good of all concerned.’

Those of us who rarely say no, have a judgment and fear about something. “I will be judged unfairly.” “People will not like me anymore.”  “I am a good person so I have to say it yes.” “I’m the only one that can do it.”  “I don’t have a choice.”

We always have a choice

Giving your money away to a charity, when you don’t want to come across as stingy, taints the gift and ourselves with a negative energy.

Even saying ‘Oh you poor thing’ or ‘I feel so sorry for her’ demeans the person and overlooks the fact that everyone of us has a journey to travel that is ultimately for our highest good.

Perhaps had Jill taken a moment to breathe and find her inner balance, rather than running down the hill after Jack,  I’m pretty sure she would have avoided tumbling after him. Besides, in this little video it is very interesting what happened to Jill in the end.

By the way. The rib is fine. And the message I chose to hear, came over loud and clear.