The Darker Side of Generosity 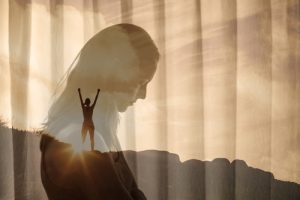 During a workshop around fifteen years ago we all  sat to do a meditation. We were asked to create an image that would help us to move beyond all limitation.  I saw a circle. Inside the circle were the three master numbers,11,22,and 33. I went to a jeweller and bough two small gold disks and had them both engraved with the image that came to me. One was for my husband and one for me. That was 15 years ago.

And after my husband died, I slipped his disk on the chain with my own and wore the two together. It  has hung around my neck for 4 years.

Last week whilst visiting a friend her son came and sat down with us and noticed my necklace and asked me about it. After telling him what the image meant to me, he said he needed something like that and could he use the image. It was a moment I stopped, took a split second to think, and ignoring the moment, I said sure. No one had ever asked me if they could use that symbol and I just went with an almost automatic , ‘Yes’.

Why am I telling you this story? Within hours that necklace that I never took of was gone.

But that is not why I’m telling you the story.  I was  upset but as I know, every upset is a set-up. There is something to learn and understand here.

At first I thought maybe I don’t need it anymore. But I loved it and so I knew that was not the reason. This was a sacred piece for me. I had created it for me and loved wearing it.  Yes, I could have  suggested to this young man that maybe he can go into meditation and create a symbol that comes to him from his own soul rather than blithely giving away the gift I was given.

But that is not why I’m telling you the story either. It because for a few moments I didn’t listen.

Our inner guidance is often called our intuition and when we take the time to listen to it we rarely go wrong.

Listening to our intuition is not like listening to a podcast or a story. It can come in a flash. A feeling. A split second. Sometimes we need to take our time to feel and listen and understand it, we need to carefully consider our response. Rather than saying, ‘sure’, ‘of course’, I could have said, “ let me think about that for a moment.”

Did I lose my  necklace as a lesson? No. I don’t think so. It fell off somewhere and someone will pick it up and probably keep it . Will it work for them as it has for me? I have no idea, but I do know this. As beautiful as it is to give things away, to pay that person’s bill, to share your precious books, to be known as ‘the generous one’,  it is also equally important to consider why we are giving things away and why we need to be so generous.

We also need to take our time to listen to in-tuition because that is what teaches us the when, where , how ans what is the best course of action at any given time.